Approximately 90% of the $400 billion invested in programs and policies directed towards low-income families today is under government control. Imagine the impact of shifting those dollars from well-intended but ineffective programs and policies that undermine families’ efforts to move forward directly to families through unrestricted investments that reward them for their creativity, resourcefulness, and initiative.

Poverty in this country would move from a state of tolerability to the ultimate goal of escapability.

The importance of partnering with state and federal government agencies to adopt the FII approach cannot be overstated. We are in various stages of discussion and trial implementations with government agencies across the country and will continue to focus on the expansion of this very important stakeholder segment.

Read on to learn about some of our government partners.

Multnomah County in Oregon, our first municipality partner, began earnest discussions with FII in 2016 through the Oregon Department of Human Services (DHS). Exploring a redesign of the deployment of Temporary Assistance for Needy Families (TANF) dollars at the time, they were also looking to satisfy a longer-term goal of revolutionizing the delivery of human services statewide. FII provided guidance both in launching a fully operational FII site in Multnomah County and in collaboratively exploring creative policy changes to tackle Oregon’s rampant poverty. 100 families across eight jurisdictions later, we continue to build on this relationship and are embarking on a one year joint pilot project with the State of Oregon’s DHS Self-Sufficiency Programs (SSP).

Guided by a common set of values and beliefs, we are working together to create an effective and scalable framework for Oregonians statewide. By leveraging FII’s UpTogether.org platform, focusing on family strengths, and encouraging personal growth and community building, we will gather insights that can be used to design policies and investments that match the initiatives of Oregon families. The pilot will focus specifically on 900 rural families in Jefferson and Lincoln Counties who will receive access to UpTogether and up to $900 over the course of the pilot. We will  engage individuals and families as key drivers of their own success, leading to economic security and an eventual exit from poverty. A noteworthy DHS redirection of TANF and PACTT (Parents and Children Thriving Together) dollars is making this pilot program possible. With 65% of the pilot’s total funding requirements covered by state funds, the remainder will come through joint fundraising efforts. 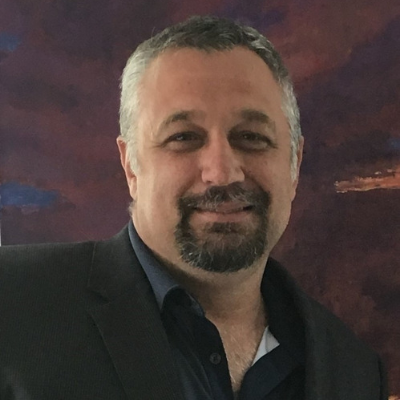 “We are excited to bring the FII approach to families in Jefferson and Lincoln Counties. We believe this partnership will help the families we serve get on their feet, climb the economic ladder and move out of poverty. Through the FII approach, we are hoping to continue creating opportunities that will bring about a fundamental change in poverty and economic mobility for Oregonians.”

In the fall of 2018, FII publicly launched its Chicago site with $2.5M in commitments from lead investors Google.org and City of Chicago Mayor’s Office. Over the next 5 years, FII will work with community-based organizations and others throughout the city to enroll 1000 low-income families in the FII partnership.

Commissioner Lisa Morrison Butler of City of Chicago Family and Support Services explains why her organization decided to partner with FII to trust and invest in families, “Family and Support Services is the human and social services arm of the city and over $400M goes out every single year under our direction, most of it in the traditional way we have come to know. Yet, we have not solved any of the pressing problems that Chicago faces. And that frustrates us. 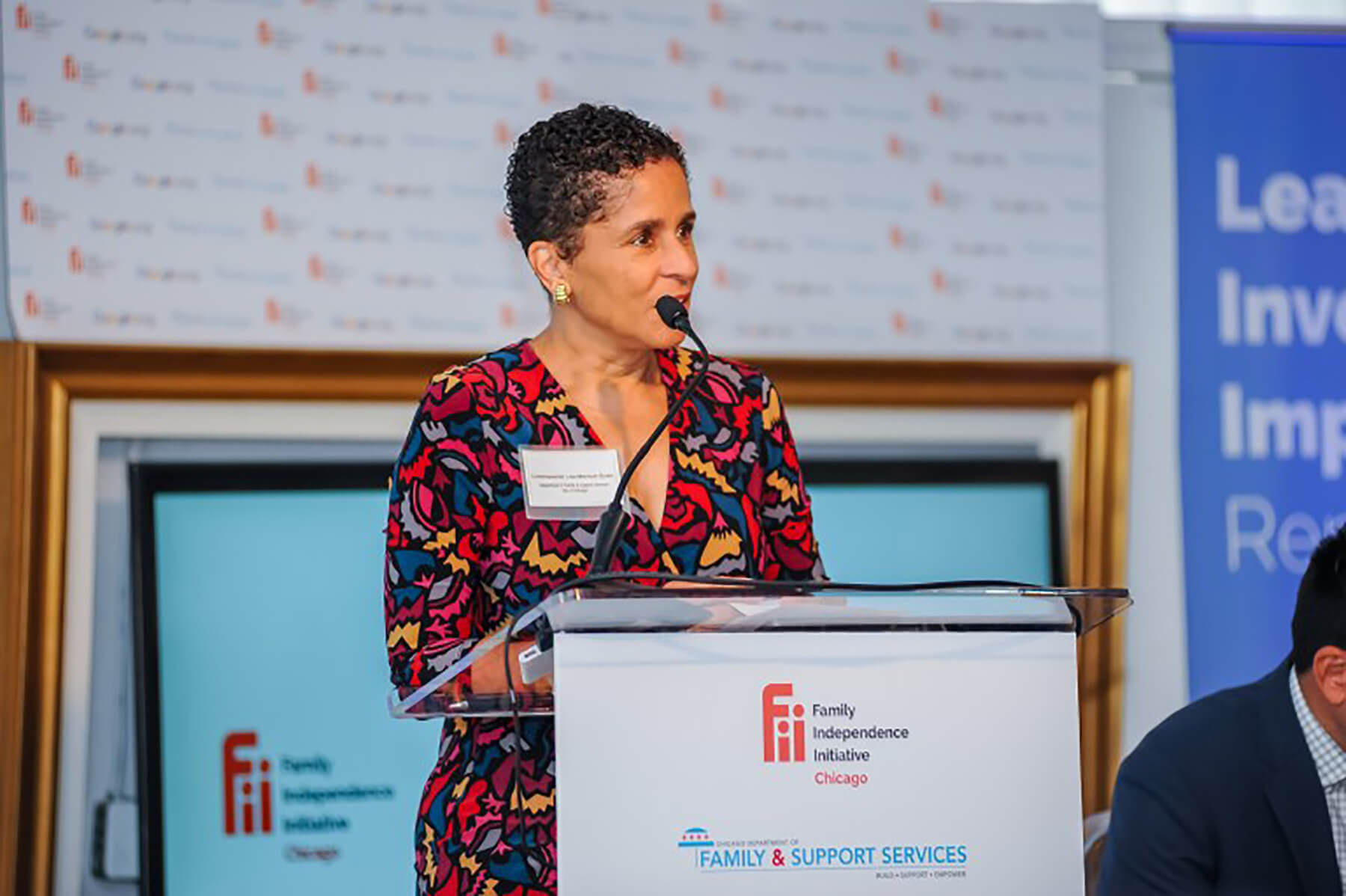 “Over the last 50 years, we have tried almost everything. But the approaches we’ve taken tend to be program-centric rather than people-centric. We fund mentoring organizations who take at-risk black and brown boys on field trips, but we won’t give a black father $100 to take his own damn kid on a field trip. There’s something wrong with that dynamic. Although well-intended, the system itself has become part of the problem.

We are super excited to start on this journey with FII and although we have no idea where it will lead, we know it won’t be like anything we’ve done before. This is about empowering people so we’ll be asked to get out of the way and let families take the lead. That’s going to be hard for us. But it will cause us all to change.”

Trust and Invest Collaborative of Massachusetts

In 2018, FII-Greater Boston began a dialogue with the Massachusetts Department of Transitional Assistance (DTA) and the Cities of Boston and Cambridge that resulted in a first step toward systems reform in Massachusetts. Together, with the support of many generous funders, we are launching a three-year systems reform research and learning pilot that layers the FII approach onto traditional DTA services and benefits with a goal of effecting DTA policy reform to promote family economic mobility and security. In addition, a team of academics based out of the Harvard Business School (HBS) has been selected to lead a robust independent evaluation utilizing a randomized control trial approach. 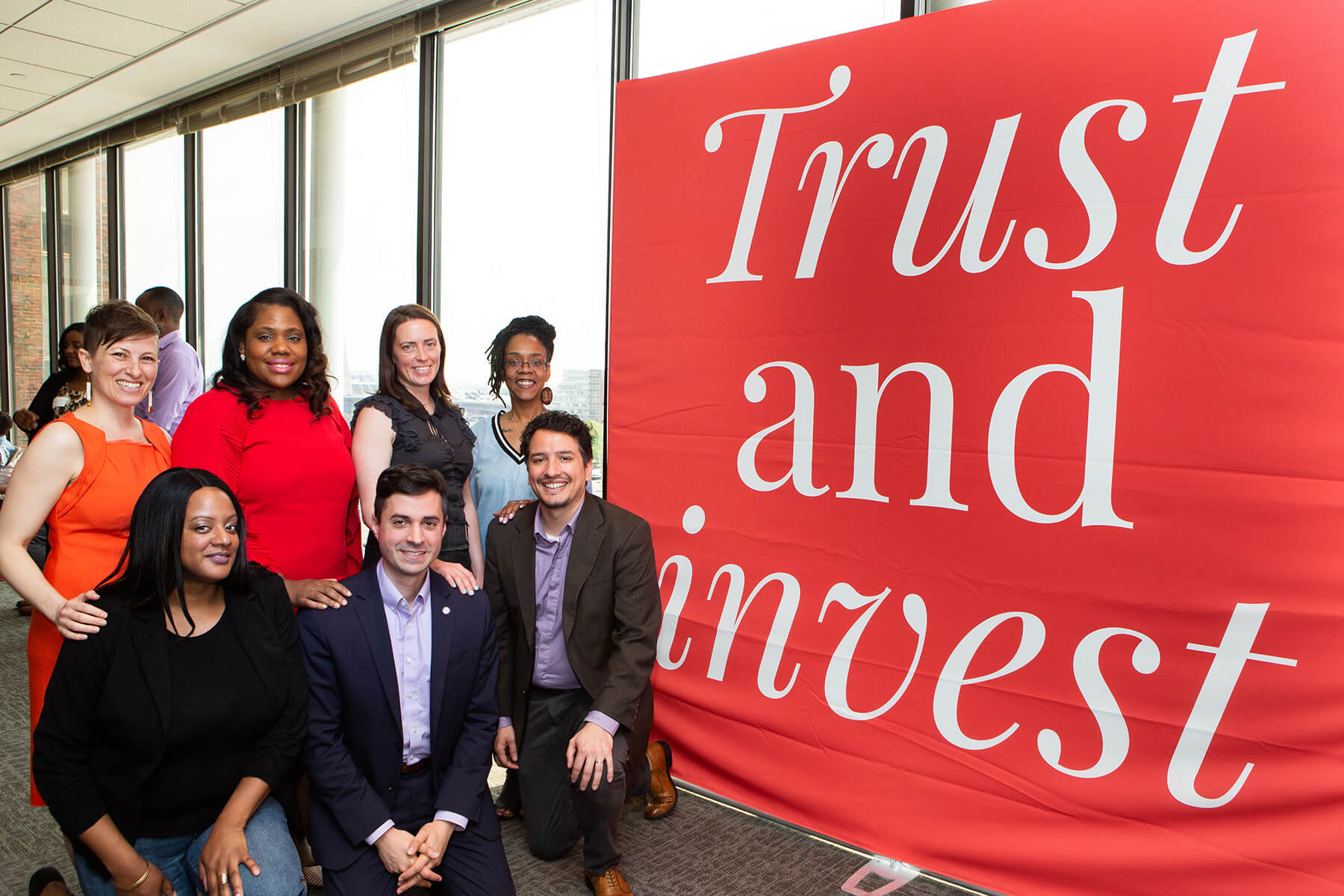 Trust and Invest Collaborative Launch on May 20, 2019.

After the completion of the three-year collaborative, DTA and FII will have scientific data to share and advance the social service sector’s understanding of an asset-based social services delivery approach that uses unrestricted cash transfers to accelerate social and economic mobility and positively influence city and state policy and practices.